Photo courtesy of www.artisanbreadinfive.com[/caption]Baking aficionados tell us extra virgin olive oil improves the texture of bread, pizza and flatbread dough. “It tenderizes the dough,” Jeff Hertzberg, a best-selling author and doctor who has just released a new book, Artisan Pizza and Flatbread in Five Minutes a Day (St. Martin's Press, 2011), saysMatthew Kadey, a registered dietitian, recipe developer, and magazine writer whose work has appeared in EatingWell and Men's Health, says olive oil helps to keep baked goods moist. It also plays a role in the physical sensation a baked good creates in your mouth. “It definitely contributes to moisture and mouthfeel,” says Kadey, the baking guru behind the website Muffin Tin Mania.Below are two savory recipes Hertzberg and Kadey shared as part of our Baking a Better Holiday focus on baking with olive oil instead of butter. (Click here to see a chart for how to substitute olive oil for butter in baking.)

This flatbread (featured in the photo above) would make a great appetizer during the holidays, given its festive red and green colors. The recipe originally appeared as a zucchini flatbread in a baking book Jeff Hertzberg co-authored, Healthy Bread in Five Minutes a Day (St. Martin’s Press, 2009).

This past September Hertzberg decided to make a variation on the original recipe, which also featured chopped parsley, sliced scallions and pine nuts in addition to the shredded zucchini.

“I wanted something to brighten up the flavor and color of all those soft lovely green things— roasted cherry tomatoes did the trick,” he says. “The tangy acidity was perfect for cutting the softer flavors of the zucchini, parsley, cheese, and nuts.” (Click here to see the recipe.)

The recipe featured here uses a dough made with olive oil. You can also use the dough for pizza, focaccia or olive bread. “The fruitier the olive oil, the better the flavor,” says Hertzberg, a physician by training with 20 years of experience in health care as a practitioner, consultant, and university faculty member. (He’s also a passionate baker: “I’m an amateur who’s taken it to a crazy level.”)

The addition of the roasted tomatoes, by the way, turned out to be a winning combo for the flatbread. Hertzberg’s suggestion: Serve this dish as an appetizer with a crisp dry white wine. 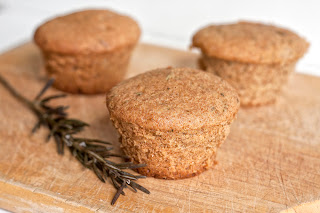 Matthew Kadey likes to use extra virgin olive oil in an herb-infused dinner roll, muffin or bread. “I tend to use it most often for items that are not meant to be overly sweet,” Kadey says. This bread recipe, baked in individual muffin tins, fits the bill. (Click here to see the recipe.)

“These individual olive oil breads are very light and have just the perfect touch of rosemary,” says Kadey, who writes a food blog about his passion for cooking with muffin tins. He adds they would make a “perfect side-kick” for hearty soups or a festive holiday meal.

The recipe is versatile. Kadey suggests you could substitute grated nutmeg for the chopped rosemary to give the bread an altogether new flavor.